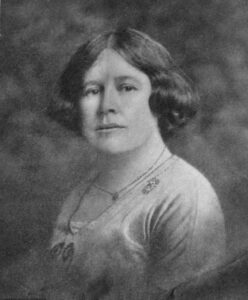 Cicely Fox Smith was born February 1, 1882, into a middle-class family in Lymm, near Warrington, England during the latter half of the reign of Queen Victoria. Her father Richard Smith was a barrister and her mother Alice Wilson Smith was a housewife. Cicely well might have been expected to have a brief education and then to settle down to life as a homemaker either for her family or her marriage partner. Thankfully that did not happen. Cicely was well-educated at The Manchester High School for Girls from 1894 to 1897, where she described herself later as “something of a rebel,”  and started writing poems at a comparatively early age. In an article for the school magazine she later wrote “I have a hazy recollection of epic poems after Pope’sIliad, romantic poems after Marmion stored carefully away in tin tobacco boxes when I was seven or eight.”  All of that early work is lost, unfortunately. She published her first book of verses when she was 17 and it received favorable press comments.

Wandering the moors near her home she developed a spirit of adventure. She would follow the Holcombe Harriers hunt on foot as a girl, no mean feat. She had a fierce desire to travel to Africa but eventually settled for a voyage to Canada.

She sailed with her mother and sister Madge in 1911 on a steamship to Montreal. They then traveled by train to Lethbridge, Alberta, and stayed for about a year with her older brother Richard Andrew Smith before they continued on to British Columbia (BC). From 1912 to 1913 the three of them resided in the James Bay neighborhood of Victoria, 350 Semco Street, at the southern tip of Vancouver Island. Cicely described herself working as a typist for the BC Lands Department and later for an attorney on the waterfront. Her spare time was spent roaming nearby wharves and alleys, talking to residents and sailors alike. She listened to and learned from the sailors’ tales until she too was able to speak with that authoritative nautical air that pervades her written work.

On November 23, 1913, Cicely, together with her mother and sister, arrived home in Liverpool aboard the White Star Dominion Line steamer Teutonic on the eve of World War I. She and her family then settled in Holcombe Cottage, Boothroyden. The family then shifted to Bury, Lancashire, and after the end of World War I to Hampshire. Her final residence was in West Halse Bow, Crediton, North Devon from about 1950 to 1954.

She soon put her experiences to use in a great outpouring of poetry, some of it clearly focused on supporting England’s war efforts. Much of her poetry was from the point of view of the sailor. The detailed nautical content of her poems made it easy to understand why so many readers presumed that Cicely was male. One correspondent wrote to her as “Capt. Fox Smith” and when she tried to correct him he wrote back “You say you are not a master but you must be a practical seaman. I can always detect the hand of an amateur.” He was almost correct. She was familiar with life at sea as few armchair amateurs would ever be. It was only when she was well-established that she started routinely using the by-line “Miss C. Fox Smith” or “Cicely Fox Smith.”

She initially had her poetry published in a wide variety of magazines and newspapers such as Blackwood’s Magazine, Blue Peter, Canada Monthly, Country Life, Cunard Magazine, Daily Chronicle, Grand Magazine, Holly Leaves, Outlook, Pall Mall Gazette, The Daily Mail, The Dolphin, The London Mercury, The Nautical Magazine, The Spectator, The Sphere, The Times Literary Supplement, Westminster Gazette, White Star Magazine, The Windsor Magazine, The Daily Colonist (British Columbia), The Register (Australia), Nelson Evening Mail (New Zealand), and last but hardly least Punch magazine for which she wrote many poems between 1914 and her death in 1954. She later re-published most of these poems in her poetry books. In all, she published some 640 poems.

Other literary works by her included three romantic novels, numerous short stories and articles, as well as several books describing “sailortown.” She also published a book of traditional sea shanties that she had collected and edited a collection of sea poems and stories primarily by other authors. In 1937 she finally realized a childhood dream by sailing around the coast of Africa, as a guest of the Union-Castle Mail Steamship Co. Ltd., stopping in the harbors along the way. She wrote of her experiences in All the Way Round: Sea Roads to Africa. In the 1940’s she began writing children’s sea stories with her sister Margaret (Madge) Scott Smith, other travel books, history books, a book about ship models, at least one biography titled Grace Darling, and contributed to and edited many collections. She also contributed many literary reviews for Punch Magazine and the Times Literary Supplement. 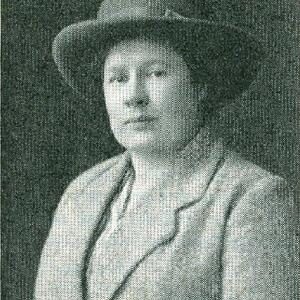 The fine artwork of her older brother Philip Wilson Smith, known at the time for his etchings of Elizabethan architecture and oil paintings, illustrates many of her poetry and prose books.

Her literary outpourings were such as to persuade the Government to award her, at the age of 67, a modest pension for “her services to literature.”

She kept writing to the end of her life about many things and many places but always with the accuracy and knowledge of an expert. She even chose her own gravestone epitaph, an extract from one of Walter Raleigh’s poems:

But from this earth
This grave
This dust
My lord shall raise me up
I trust.

Cicely Fox Smith died on April 8th, 1954, in the village of West Hasle Bow, Devon, where she’d been living with her sister Madge.

She is now gaining a wider audience as more and more musicians are putting her poems to music and producing many fine songs, primarily in the nautical folk song tradition; over 80 of her poems have so far been adapted for singing and have been recorded. It is hoped that the present book will help further such interest in the creative work of this fine writer.