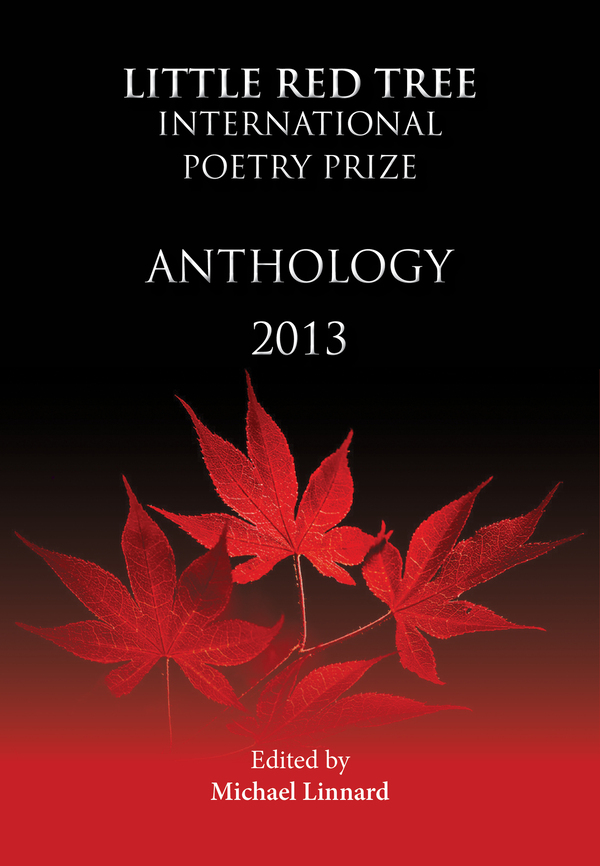 The best anthologies return us to literary origins, to our roots, shoots and flowers, a task Little Red Tree International Poetry Prize: 2013 Anthology undertakes admirably. The word ‘anthology’ means “to gather,” a word which the OED defines as “a collection of the flowers of verse ..[or] small choice poems…by various authors.”  Early Renaissance editors created the first anthologies, selecting favorite Greek poems. By the mid-1700s, some hymnals also were called anthologies, an equally appropriate way to celebrate and inspire, to elevate by and through song.

The floral bouquet you hold in your hands is arranged in three sections. Part I celebrates the five top winners. Part II gathers together notable contributions from other entrants. Part III features current writers published by Little Red Tree.  Each part of this arrangement merits a close look.

In “After October Snow,” Jendi Reiter, who took first prize, writes with wide-eyed wonder about the early months of marriage, symbolized by a large tree, covered in snow, which looks like

a brown bouquet
tossed by a giant bride….
[The snow], draped over wires
reckless and lazy as a satisfied sleeper.

Morning’s light warms the horizon “like golden tea” and “steeps the still-red maple/severed, baring its rings of age.” As a sense of foreboding builds at the edges of this poem, the speaker notes that storms sometimes take down a tree, turning it into “a leaky church,” but, for now, their wedding picture’s “sepia canopy holds firm” as “a cardinal flashes [by]/ bright as a virgin” with the “new rustle of wings in her womb.”  Two supporting poems, “I Leave the World Today” and “Controlled Burn,” rely on refrain and natural images to capture the later stages of this or another relationship. Telling lines accuse an unnamed partner of “sharing men like gathered grapes” until “your marriage is in boxes” while “all those stripped vines/[are] poised to blaze.”

The second-place winner, Suzanne Ondrus, flies us, via the imagination, to West Africa where her todays, tomorrows and yesterdays expose a rich vein of reflection that bonds her to a lover, a land where slaves once hid and the squalor of life that foretells our mortality. Yet, in “Inch by Inch, Row by Row,” she finds solace, now, because “the bulbs will push up another quarter of an inch forward.”

Five third-place recipients demonstrate a similar sensitivity to geography and time, though in radically different settings. Marie J. Ross carries us through courtship, marriage, death and an expected reunion on “The Other Side of the Moon.” Peter Mansson’s “The Flame” is an extended philosophic trope on celestial creation and destruction of the life-force. Siobhan O’Leary’s “Nettle Soup” brings us firmly down to earth, for it stands deep in memory’s forest: “I want to be here, be present, be plucking/the knife-edged new growth of the nettle.” Lynn Veach Saler reflects on social norms in “The Irish Travelers,” while Joan Goodreau’s “Shapes of Autism” and “Remembrance” move us as close as love and science can carry one to the edges of the unspoken. All are worthy of several readings, aloud and in the quiet chambers of the heart.

“Notable Selection” is packed with other entrants from around the world. Each voice remains engaged, even urgent, but sometimes the poetic form chosen, or lack of form, or too obvious a reliance on rhyme may obstruct a reader’s delight. In several, education prevails at the expense of entertainment and sudden insight. In part this happens because several poets have chosen historical figures or events, and have not yet mastered their subject’s (likely) emotions.  Yet setting aside the lyrical “I,” even for a moment, is an uncommon modern achievement, and many poets here are to be praised for their promise if not their realized effort.

“The Red Pillow,” by Anthony T. Lagler, is a case in point.  Recalling that, for Tolstoy, “It was the old red leather pillow that gave him rest/ Until he married Songya Behrs in September of 1862.”  The poet tells of Tolstoy

…sharing the simple
Life of the working people
And writing some of the finest words
That the world has every known.
But now his

…slumber on fine linen
Also awakens Tolstoy to the difficulty of
Inequality and the importance of the spirit.

His search “to find the real beauty of love” become “wanderings,” which, in time, “quickly turn to flight” from the privileged class, church teachings, and his noble wife “who, even though she loved him, did not share his notion/Of spiritual truth through poverty.” Caroline Zarlengo Sposto celebrates “Lee De Forest, father of radio broadcast.” Sothy Anthonithasan Croos’ examines “Lessons From Tsunami That Shook Japan” and Mo Tejani’s writes about “The Nine Ages of an American Life in the 21st Century.” The latter captures the vanities and anxieties of contemporary American life, organizing a hypothetical person’s life span into nine games. It starts with a gestating, Mozart-listening mother, moves on to ‘Spin the Toddler,’ then sketches life in college, the first job, a mid-life crises and old age. It’s not a pretty sight.

Other poems in this section emerge from personal experience, ignited by a feeling, dream or memory.  The speaker in Jamie Gersh’s “Deer” wakes to find his “parts in an unlabeled heap/beneath the bed sheets.” Wordsworth’s golden daffodils come to mind when reading J. T. Miford’s “Touching,” which speaks of “a blue and yellow flower/[that] quietly touches my sight.” Lynda La Rocca’s “Incubation” slowly births a word that “spreads its wings” and “pushes past the tongue.” She ends: “I know it knows/I cannot breathe.” In “Beet,” Joseph Dorazio speaks of that “stigmata root” that grows best when rain falls like “a cold borscht,” producing a food that takes its revenge on acolytes by staining their hands red. Janet Ireland Trail’s “Planning One’s Life” conveys the “powerlessness of paper dreams.” Edson Atwood gently rhymes and understates a single “demure” affliction—sadness—which has “no cause, no course, no cure.” In Sue L. Christian’s “The Ice Cave” and Alexis Gines’ “In Her Car” memory itself is the affliction. In Gines’ poem “a ticket/she denies, and an empty communion cup/that reads: In Remembrance of Me” lie untouched on the passenger’s seat.

A balance to life and death is restored in Diane De Pisa’s “Peace Like a River” and Sailaja Devaguptapu’s “Saga of the Sages.” Elif Sezen’s “Hezarfen” elevates both, literally. Hezarfen Ahmet Celebi, a 17th century Turk who lived in Istanbul, is said to have flown on artificial wings from the 183-foot tall Galata Tower to Uskudar, on the other side of the Bosporus. Like Icarus, this Turkish hero frees people, “one by one/ in their dreams.”

By the anthology’s third section, the reader’s hands are bloodied by rose thorns, but our eyes are filled with beauty. Enter the master florists, poets published by Little Red Tree, to arrange our last still-tangled thoughts, feelings and voices which, in their hands shine, once given the proper poetic image, idiom and form. Four groups of florists gather in this room.

The first come from another era. Jack London needs no introduction as a journalist and popular writer, yet few know of his fascination with classical poetry. This anthology remedies that oversight with “The Worker and the Tramp.” Cicely Fox Smith, an early 20th century English woman of considerable fortitude who yearned for adventure, absorbed nautical stories and idioms around World War I. She published numerous poems many assumed were written by a man. Like London, her works remind us that rhyme; strict poetic form and public topics once were the artistic norm.

The next master florists bear laurels from around the world, and create a bridge to the modern era. William Meredith, a World War II naval pilot, US Poet Laureate and Pulitzer Prize winner, invites us to share his wisdom in the iconic “A Major Work,” printed here both in English and French. Lyubomir Levchev’s “Green-Winged Horse” provides a glimpse of his magnificent poetic power, much honored across Europe, the U.S. and his homeland, Bulgaria.  In the title poem of his new book, Levchev, winner of the 2013 William Meredith Award for Poetry, recalls a small branch “with two buds and three leaves” torn from a tree by spring winds. He laments not having picked it up years ago for fear that someone might accuse him of having broken it from the tree. Now an old man,

I walk toward my end without fear
and feel you dip into my heart
as if into an antique vase, and…
when I fade
into the distance, when
I become quite little
you’ll become my little horse,

You’ll be my green-winged horse.

David Fisher, last year’s winner of the Meredith Prize, appears in this volume in the form of “The Bear.” San Francisco poet A.D. Winans’ poem is a spirited dedication: “For Bob Kaufman on Ending His Vow of Silence.”  Richard Harteis, president of the William Meredith Foundation, offers us the quietly elegiac “After the Rain.” Ann Lauinger’s “Against Butterflies” contrasts with quick poetic strokes Hoefnagel’s Old World illumination of a pear, laying “like a pregnant woman on her back,” to our modern “Consciousness, a flabby dragon/in charge of the very choicest gardens.” As she reminds us, “a large moth marches up the neck” of that 16th century pear whose “tapered stem’s convex/shelters a worm, hairy, thin,/ and feeble as a sulking infant.” But, she notes, worms “ply an honest corruption” while our flabby dragon, “all scales and smoke,” spends its time

…zig-zagging
from pride to self-pity, snorting
indignation, he soars and creeps
and whines about the winged-thing’s burden

as if he had some genuine gripe
when his tinsel hoard of lucubrations
isn’t a patch on a pear that’s ripe.

Next come the accomplished apprentices to masters, young and old, poets like Tony Maude (“Spelsbury Church”), Diana Woodcock (“Swaying on the Elephant’s Shoulders”), W.F. Lantry (“The Structure of Desire”), Tom Kirlin (“Under the Potato Moon”), Lily Iona MacKenzie (“All This”), and Helen Peterson (“Melons and Memory”).

Finally, a considerable group of regional voices emerges in this collection.  Tamara Martin (“Every Man and Every Woman”), Venice Quebodeaux (“In Jennifer’s Path”) and Jon Norman (“The Plains of Our Mutual Rage”) offer a variety of styles and themes. Nikoletta Nousiopoulos’  “All the Dead Goats” gives youthful voice and deep appreciation in praise of her ancestors:

…The earth is not just one
giant grave, not the filth of flies or the dirt of bones;
this is our land, the blackberry embroidery, the sweat
off our fathers’ muscle.

In “The Apologia of Hannah Ocuish, Hanged at New London, Connecticut, July 1786,” Mary Elizabeth Lang carries us back in time through the voice of a 12 year-old “half-breed orphan” who dared to “eat the berries, dark red/and juicy, at the edges of the beds.” Betrayed by hunger, she kills a farmer’s six-year-old daughter who worked with her and later told on her. Now, “because of the berries, we won’t see another” summer.  Joanie DiMartio’s “Strange Girls” and Mary Vallas Posner’s “Learning” round out the volume, which is punctuated with six poems by Jean-Yves Solinga, a Frenchman, born in Algeria, who has spent most of his adult life teaching and writing in southern Connecticut.

Clearly, this gathering of voices is to be treasured, even more, perhaps, than the individual poems or prizes. For the lucky visitors, it will be an introduction to a publishing company that willingly adds a sprig of visual arts to tall vases of poetry, heightening our pleasure and delighting all who enter these choice rooms.

Tom Kirlin
Under the Potato Moon