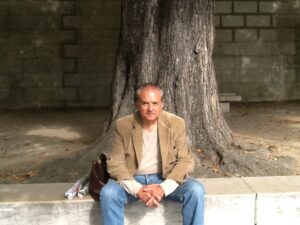 Jean-Yves’ family comes from Provence. He was born in Algeria, and lived thereafter between the south of France and Morocco in what he describes as an idyllic youth. Upon settling in America with his family, at the age of 15, he had already been writing poetry: being first published, in English, in A Letter Among Friends along with Jon Norman of New London, CT. After serving in the U.S. Army, he began a successful career in teaching, translating and lecturing. Jean-Yves holds a doctorate in French on the representation of the Maghreban [North African] landscape found in the texts by Pierre Loti, André Gide, Albert Camus, and Jean-Marie Le Clézio.

Jean-Yves’s poetry continues to use an infrastructure of poetic or lyrical prose. He aims for a linguistic landscape that lives between the inevitability of hard reality and the aspirating appeal of vaporous passion: Exploring the contrasting worlds of the euphoria of sensual happiness and the inevitability of its demise.

Many of his poems have a personal, as well as societal breath. It is often a singularly unique view of mankind’s reflection through the prism of the lyrical language with, at times an impressionistic poetry, tackling many hard realities of history and society.

Jean-Yves Solinga is a poet of immense ability and range whose lyricism is truly remarkable. It contains many breathtakingly beautiful and sophisticated poems that reach out to the very limits of the human condition where true art exists. Many facets of his work continue to find inspiration and perspective in his cultural duality.