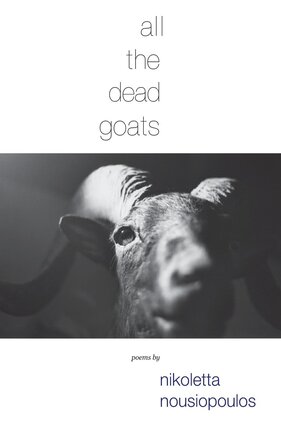 all the dead goats, is a stunning debut book of poetry from a young poet of immense ability. Born in New London, CT, Nikoletta was raised hearing many wondrous stories and myths of a small village, Korifi, in rural Greece, which she eventually visited after the death of her grandfather. The poems are consequently infused with an emotional intensity – a reclamation of cultural identity and language – that effortlessly rise to the “sacred resonance” she felt when first she walked in the footstep of her ancestors, in the mountains of Korifi in beautiful Hellenic Macedonia.

Before all the dead goats was a poem or a collection of poems, it was a story passed down by my great grandmother, Efthemia Nousiopoulos. It states that once a Greek soldier was walking through the mountains of Kozani when he noticed a small goat curled under a tree. As he approached the goat, the creature began to speak in a language unknown to him. The soldier immediately felt paralysis and fear upon the encounter. Suddenly, the goat stood up and ran towards the mountain range. As the soldier watched, the goat morphed into a bull, and eventually human form. My great-grandmother said the soldier did not know what the goat said, or what the encounter had meant, but she promised the story was true.

I was about 4 years old when this story was translated to me, and I remember experiencing horrible nightmares. What had bothered me most was the creature’s ability to talk and change form. Greek Sunday School taught me that this was something the devil would do throughout scripture. My grandparents’ household was undoubtedly one full of superstitions. Naturally, I grew up having an intuition concerning spiritual matters. The meaning of this story has changed somewhat since I grew older. I relate to the man and his separation from language, yet I envy the goat and its abilities. From a young age, this story has haunted me and inspired me to “change forms” via poetry.

Although I grew up surrounded by the Greek language, it was never something I mastered. Throughout my childhood, I remember instances of not understanding what I heard and saw. My grandparents taught me a few words and would buy my siblings and I Greek children’s books. I loved the shapes of Greek letters and would spend hours flipping through my grandmother’s Dream Book. Sometimes I would create my own stories, and transcribe them into drawings for my great-grandmother. She would respond to my images by drawing a chicken for me. One of my biggest regrets is that I was never able to write to her in Greek. I believe that the stories of my childhood influenced my experience of Korifi as a magical place. Also, the mysticism of the language and customs only furthered my curiosity, and my desire to belong.

Korifi was a place I visited in stories―it was not reality. While writing these poems, I thought about the vocation of poetry, and where it comes from. Every poet has their own ideas about what brings them to write, but I can only mouth the word “Korifi.” For me, Korifi was always an initial drive and entrance into a poem. I think this impulse is what caused me to love Korifi so deeply, even if I had never been there. It was as if Korifi existed inside of me, as well as outside. My relationship to the village, both the imagined and the actual, has brought fulfilment into my life. More importantly, my connection to Korifi has assigned me on a mission to preserve its stories. Writing about Korifi led me to question dimension and space, with relation to the self. For example, how could I feel comfortable in a place known only through old photographs and stories? Who was I, and what did it mean that I was Greek? What I came to know as my family history streamed through various eras and lives, eventually falling onto my lap.

The first time I visited Korifi I immediately experienced its sacred resonance. It came as no surprise that the landscape and stories of the village would become a recurring topic in my poetry. Just as the dead haunt the mountains and winds of Korifi, so it haunts my poetry, and rightly so. I have always imagined the possibility of my existence in the ruins of houses and the little church on the hill. These images speak to me about my family, in ways that my knowledge of the Greek language failed to do. Maybe this resonance emerged from a desire to have been born there, or perhaps, I was born there.

When I became old enough to consider the reality of visiting the village, my aunt and godmother, Stravoula “Stephanie” Hronis, passed away from ovarian cancer at the age of 49. Strange, how the death of a loved one can strike an urge in us to know. After she died, I longed to see Korifi. I wanted to roll the soil in my hands and taste the figs that grew in the front yard. I wanted to see the moon from a different angle, smell the goat cooking, watch families dance to the bouzouki and drink jugs of Retsina. All my life I felt absent from these physical experiences, yet wasn’t my name “Nousiopoulos?” Didn’t I deserve to feel part of these “Macedonians,” or would I have to earn my right? I learned fairly quickly that there would be no initiation for my acceptance. Upon my first visit to Korifi, my father took me to the homes of elders, and they kissed us with tears in their eyes, saying how happy they were that we had come home; but who were these beautiful Macedonians? It felt wrong to call them strangers.

Luckily, my father has passed down the stories that are important to our family history. I was 17 years old when I first saw Korifi. From the beginning, I had a preconceived notion of what it looked like. After a few days of sleeping in the house my father was born in, I started to hear voices in my wakefulness and dreams. Although I only knew a little Greek, my father recalls how I would speak in Greek while sleeping. The landscape began to alter the workings of my imagination, and consequently, I developed a personal understanding of the language. I think the stories gathered from my childhood were an influence on my mind as well, for Korifi had become more than just a place my family originated, but an obsession.

One day while exploring the village, I felt as if everything I saw, from the trees to stones, were singing. If the wind touched me a certain way, then I assumed it was a lost voice haunting the village. It was as if conversations were taking place between the landscape and my senses. Eventually, all the dead goats became an accumulation of these lost voices. Sometimes, meaning is not found in words, but in smells and tastes, memories and dreams. When language fails me, I turn to the images of Korifi. These experiences and visions have stood as an explanation about who I am, but the poems exist without me and tell a story of their own.

This is not the first time I have attempted to write about Korifi, but after I lost my grandfather in November 2008, I started to feel it was the right time. After visiting Korifi and meeting its remarkable people, I made it my duty to record their stories. There was a painstaking realization that this once imaginary place had finally become part of me. What voice would retell these stories and commemorate its people, if not mine? Even as I write this introduction, the villagers are starting to fade, and I am afraid their stories will disappear if I do not preserve them. Poetry is the only way I know how.

After my initial visit to Greece, I became completely obsessed with the culture and began reading poets like Odysseus Elytis and Yannis Ritsos. I wanted to know the ways they spoke about Greece, a country so full of history, art, and patriotism. I tried to learn “what it was like” to be Greek by reading their poetry. I would write poems from the perspective of villagers, and study torn photographs until they covered my dreams in wallpaper. My father always said that he dreamed of bringing his children to the village, and he did; how strange that his dream has become part of mine. Maybe that is the magic of Korifi, that she haunts her people, and she makes our hearts speak. Even if my speech and thoughts were communicated in small ways to my grandparents, I feel they understood. Maybe now, my grandfather can finally hear and understand my words.

Whereas the poems of, Part I: all the dead goats, were created from the stories and experiences of Korifi, Part II: Rediscovering Alpha came out of a love for the sounds and language of Greece. The poems attempt to either imitate the letter by shape, or by sound. In fact, most of the words are taken from a Greek Dictionary and have been translated into English. If one were to translate some of these poems, they would appear as strings of alliterative verse. Rediscovering Alpha is my interpretation of Greek letters and symbols, that for a long time were mysterious to me. Now, I claim them. My wish is that the poems in this collection communicate with the people of Korifi, commemorate my grandfather Ilias and his daughter Stravoula, and designate myself as more than a Greek-American, as a Nousiopoulos, descendant from the mountains of Korifi. May our origins be remembered and remain in Korifi. 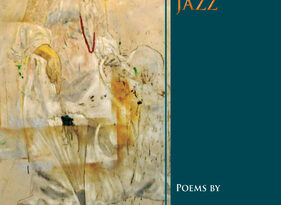 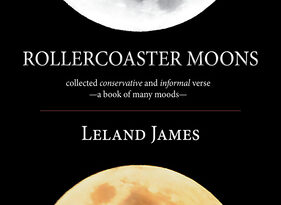 Rollercoaster Moon: Collected Conservative and Informal Verse — a Book of Many Moods— 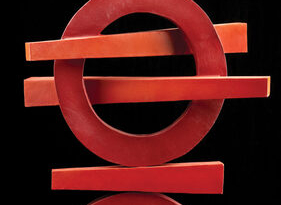 Under the Paper Moon